Looking Forwards, and Learning the Lessons of the Past 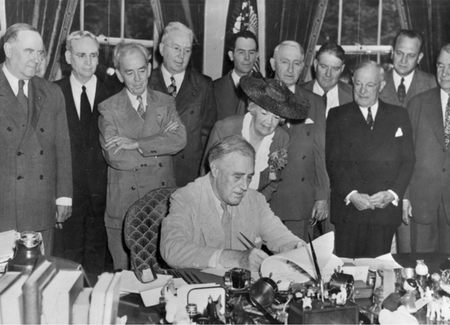 The recent shift in the political landscape of the United States has sent shockwaves around the globe. Even here, on the other side of the world, we are considering what the future holds, and what the new administration means for citizens of the US, Australia, and every other nation on Planet Earth.

“No man is an island,” the metaphysical poet John Donne wrote in 1624. This piece of phrasing has never been more appropriate than it is today, almost 400 years later. We live in the age of supreme connectivity – a time of free trade and proliferation of information – and, as one of the last remaining global superpowers, the USA sits right at the heart of this.

So, in this time of uncertainty, it is worth looking back to see what positive lessons we can learn from the past.

On October 25th, Executive Director Social Justice University of Technology, New South Wales and former Minister for Women and Minister for Education and Training, Verity Firth spoke at Chain Reaction’s bi-monthly Executive Breakfast event. During her speech, Verity delved into the socio-economic history of the United States in search of lessons which could be learned today.

The history of the USA is chock full of landmark events, political flashpoints, economic booms and busts, but the event which Verity choose to highlight is often overlooked. Perhaps because it was such an unbridled success!

Verity was talking about the G.I. Bill – or the Servicemen’s Readjustment Act, as it was originally known – signed by Franklin D. Roosevelt in 1944. The bill was designed to assist members of America’s armed forces as they transitioned back into everyday life. The war was still raging as the bill was outlined, but the government – keen to avoid a repeat of the scandal relating to treatment of World War One veterans in the 1920s – set about drafting a set of provisions for returning servicemen.

Under the terms of the bill, servicemen were given an allowance which they could use to attend schools, colleges or universities. In addition, they could receive favourable interest rates on mortgages and business loans. The scheme was immediately popular, and by 1956, around 2.2 million veterans had used the bill to access college or university, with a further 5.6 million utilising the funds to enrol in a training program of some description.

The expert analysis of the bill and of the social advantages it provided was a positive one. Experts such as Stewart Brand have highlighted how the program’s outlay of US$14.5bn was paid back eightfold in taxes collected over the following twenty years, and economists and social historians alike have described the G.I. Bill as a huge success.

But this – one of the US government’s crowning social achievement of the last century – possesses a wider relevance for lessons today.  In a time which has seen austerity drives within some of the world’s most successful economies, and widespread cuts to public services and to the ‘luxury’ of welfare, this example clearly demonstrates the importance of investing in education, in social mobility, and in the social economy.

Without such investment – without a more intimate understanding of what it means to educate for growth and to build social cohesion – it will be a very sorry legacy that our generation leaves to its children and grandchildren.