Why the Purple Heart Appeal Is So Important 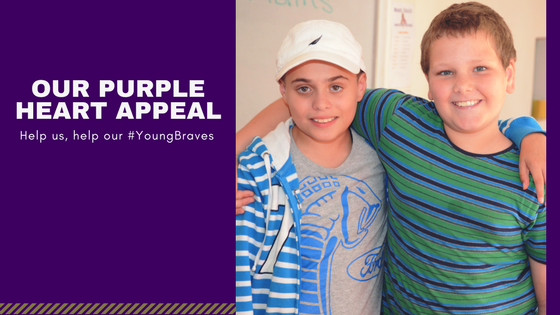 A Purple Heart is a military accolade delivered by the United States Armed Forces to soldiers who have been injured in combat. In essence, it is a recognition of their bravery, and a token of gratitude for their sacrifice.

In this context, the name Purple Heart may seem an odd choice for the title of a funding appeal, particularly one centred on young people in society. We have witnessed major parallels between the lives of wounded veterans and some of the young people we have worked with in the community. We have recognised similar levels of pain and bravery to follow.

Sydney is renowned as a leading global city. It is one of the economic powerhouses of Australia. But, it is also home to some of the most disadvantaged suburbs found anywhere in the country. Areas such as Ashcroft-Busby-Miller, and Bidwill-Hebersham-Emerton rank as low as the second percentile in terms of advantage and economic prospects, and these suburbs are not alone.

Disadvantage and poverty in New South Wales in general is on the increase. A study released by the National Centre of Social and Economic Modelling at the University of Canberra found that poverty levels in New South Wales had risen at a rate above the national average between 2001 and 2011, and that only Tasmania scored worse than NSW in this regard.

These figures underscore the need for a service like the Learning Ground at Mount Druitt, but what about the Purple Heart? What has that to do with it?

The Purple Heart Appeal is in place because, while numbers and figures are certainly important for illustrating the scale of a problem, they are not sufficient when it comes to telling the real human stories which exist at the heart of the issue.

In our work at Mount Druitt Learning Ground, we meet young people and their families all the time. We speak with them and we understand what they have been through, and often what they are still going through. We try to foster a spirit of engagement and we support them, but it is they who inspire us, with their strength and will to survive and belong.

Teenagers from broken homes in the area are often victims of and witnesses to domestic violence, and have grown up surrounded by drugs and crime. They have been told repeatedly that there is no hope for them, that they are simply the next link in an ever unfolding chain of disadvantage and criminality.

Over and over we witness hope and belier. Many remain resilient and determined to make a better life for themselves and for their loved ones. This is why we recognise their struggles using the #YoungBraves hashtag, and by doing our utmost to support them in their journey and their progression.

We believe in the power of the Learning Ground at Mount Druitt. However, we recognise that what we are offering is no magic wand. The success of our endeavours depends upon the strength and character of the young people we work with. And they are truly amazing, having been through so much trauma and struggle, and yet having come out the other side.

This is why the Learning Ground needs your help. The services we provide are acutely necessary in New South Wales and beyond, as Australia struggles to sort out its social and economic disparities, but we cannot perform magic. Instead, we need your support as we go on working with families who are hungry, unemployed and in need of a hand up not a hand out.

Click here to take a look at a recent report carried out by Western Sydney University which highlights our successes, or get in touch with a member of our team for more information on how to make your donation.